These are the urgencies that move Anaïs Volpé, the young actress-writer-director-producer who envisioned the cross-media project HEIS (chronicles), which was born as a web series (5 episodes of 11’ each), expanded into a feature film (90’) and also an art exhibition.

HEIS (chronicles) the film had its WORLD PREMIERE in the World Fiction Competition of the LA Film Festival this past Sunday, 6/5, and today, 6/9, won the WORLD FICTION AWARD.

I met Anaïs on Twitter, few months ago, because she was following Women Occupy Hollywood and she told me that her film was in competition at the LA Film Festival in the World Fiction section. I saw the trailer of her film and was so extremely touched by the honesty, clarity and boldness of her talent that I did some research about her and her work and found an interview in which she explained her method of working. Her needs are minimal. She made the film with virtually no money, betting everything on the story and the ability of the characters to communicate the feelings that inhabit the story. She is so concentrated on the truthfulness of the story and her characters that she doesn’t need bells and whistles to express her thought. Her filmmaking is minimalist and yet sophisticated. Different media add to the texture of the image. As spectators we are completely carried away by those lives and their emotions, their doubts and sense of guilt. We go up and down with them through the roller coaster of their lives. Anaïs goes right to the point, always.

Her lucid stubbornness in creating an environment of freedom permits her to tell stories the way her stories need to be told. In order to do that she worked as a waiter in a bar in the center of Paris every morning so she could shoot her film every afternoon with her group of talented friends/creators, her accomplices, her ‘family’ as she calls them.

She left home very young and created a new family in the arts, surrounding herself with her ‘tribe’ who add layers to her already solid and rich vision of the world. Everybody in the tribe is a creator who expresses a personal vision, which Anaïs, like a skillful conductor, incorporates into the map of her imagination.

The themes that she deals with in her story are essential, important, serious, but the freedom so powerful that the film exudes lightness and grace. Enormous grace.

Anaïs talks about family entanglements, in this case the ties between a twin brother and sister and their mother. The questions are tough, eternal: How to cut the cord and go out in the world in order to find yourself and eventually follow your passion, when at 25 years old you are back living with your mother again because you can’t find a job.

The twins each have different goals. The brother wants to be a boxer and the sister is looking for a fellowship in the arts that will take her far away. Living or not living is the main question, where living is a way to not give up and not living is a way to resign from your true self. The sister dreams of faraway places where she can find elements of her origins because her mother, an exile from a (fictional) country, never talks about where she comes from. For the girl, going far away also answers a profound necessity to fill the void that surrounds her own identity (origins). For the brother, staying at home is a form of reassurance, but is also an emotional trap set by the loving parent.

The narration is documentary style, but after a few moments you quickly realize that everything is scripted and nothing is left to chance.

The big plan of the story is perfectly designed by Anais’s beautiful mind and vivid imagination, and this awareness at a certain point gives the spectator a sense of peace.

As long as there are creators, artists able to do what this young cineast does in and with her film, we are safe. She will find an exit somewhere for all of us. We won’t be trapped in our lies anymore. We’ll have our piece of freedom to experience, and then it will be up to us to fight for that and live the life that we want.

When I finally met Anaïs here in Los Angeles, she was with one of the actors, Emilia Derou Bernal who plays the Malik in the film, the person, the entity, the religion to whom you turn when you need help, when you are in search of the truth and have doubts and are filled with problems. Emilia, a wonderful, refined, strong French actress, is the wise one, the Malik in the film as well as in Anaïs’s real life. She is part of the tribe that supported and helped the creation of the project HEIS. The rest of the cast, Matthiew Longatte, Akela Sari, Alexandre Desane and Malec Demiaro are simply breathtaking. Their performances are truthful and powerful including the actress-director Anaïs Volpé.

Our conversation was immediate, truthful and charged with the emotions.

I discovered that the actress who plays the ‘mother’ in the film, Akela Sari, left the material world suddenly after the film was completed, leaving the tribe, and especially Anaïs, frozen and alone. They had talked about the possibility of being selected for the Los Angeles Film Festival and coming to the City of Angels together.

And now that the dream has become reality, Akela Sari is still with them, an angel among the angels in the City that belongs to them.

Women Occupy Hollywood and I will continue to follow Anaïs Volpé because we want to be part of the tribe, part of the people who support and accompany her in her path in the arts.

I hope that her film and her words bring us back to what is important for us, women cineasts, in this strange, hybrid community called Hollywood.

At the end of our conversation Anais said to me: ‘The moment I don’t have the same freedom to do what I want to do, I’ll quit. There will be no reason to continue!”.

HEIS (chronicles) is part of a cross media project written, directed and produced by Anaïs Volpé

– a feature film – a web series – an art exhibition 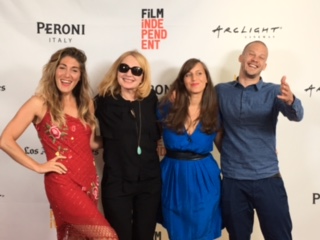 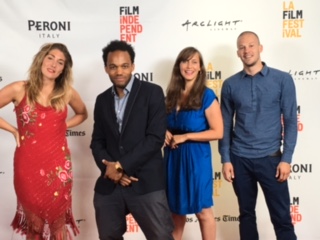